Busley et al. bring these advantages to quantum gases of light and explore a textbook scenario: a two-dimensional, spatially uniform gas of bosons.
[from Photons think inside the box, Perspective, Science 375 (6586), pp. 1355-1356, 2022]

The group of Martin Weitz succeeded in creating a gas of light particles that can be extremely compressed. The results confirm the predictions of central theories of quantum physics. The findings could also point the way to new types of sensors that can measure tiny forces. The study, which was led by ML4Q Indepence Grant Fellow Julian Schmitt, was published this week in Science. Congratulations to the authors on their impressive work!!

Gases usually consist of atoms or molecules that swirl more or less quickly through space. It is quite similar with light: Its smallest building blocks are photons, which in some respect behave like particles. And these photons can also be treated as a gas, however, one that behaves somewhat unusually: You can compress it under certain conditions with almost no effort. At least that is what theory predicts. The group has now demonstrated this very effect in experiments for the first time.

“To do this, we stored light particles in a tiny box made of mirrors,” explains Julian Schmitt, last author of the study and ML4Q Independence Grant Fellow. “The more photons we put in there, the denser the photon gas became.”

The rule is usually: The denser a gas, the harder it is to compress. And this is exactly what the team at the University of Bonn observed – initally. However, the behavior changed abruptly at a certain point: As soon as the photon gas exceeded a specific density, it could suddenly be compressed with almost no resistance.

“This effect results from the rules of quantum mechanics,” explains Schmitt. The reason: The light particles exhibit a “fuzziness” – in simple terms, their location is somewhat blurred. As they come very close to each other at high densities, the photons begin to overlap. Physicists then also speak of a “quantum degeneracy” of the gas. And it becomes much easier to compress such a quantum degenerate gas.

In the future, the quantum-enhanced compressibility of the gas will enable research into novel sensors that could measure tiny forces. Besides technological prospects, the results are also of great interest for fundamental research.

Read a full coverage of the paper on the website of the University of Bonn (German version). 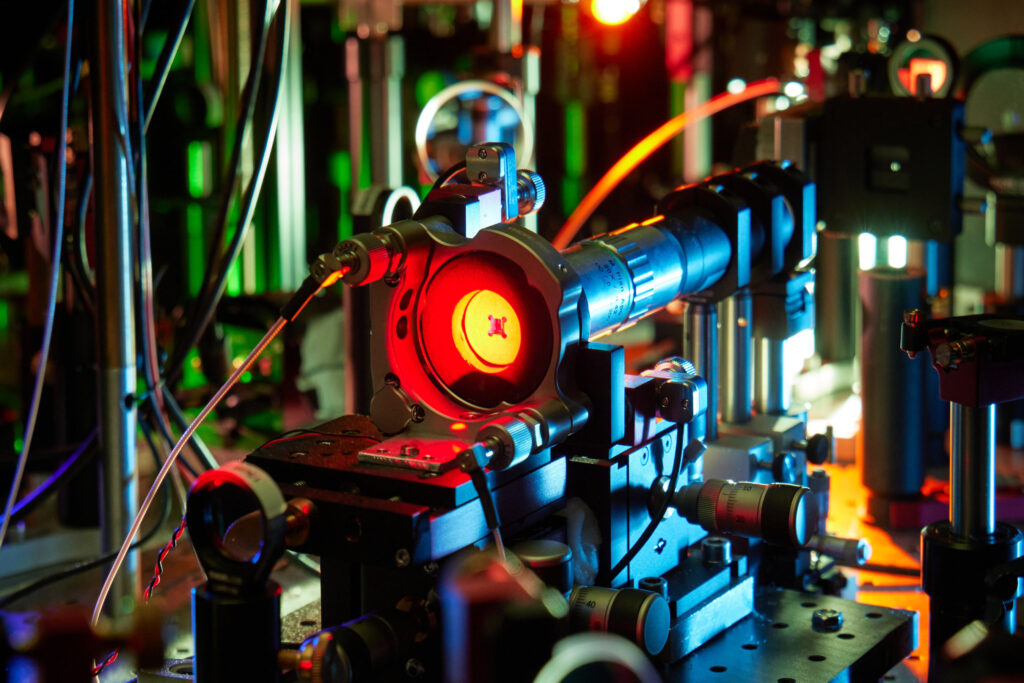 The centerpiece of the experiment: the optical microresonator realizes the ‘photon box’. Image credit: Volker Lannert/University of Bonn