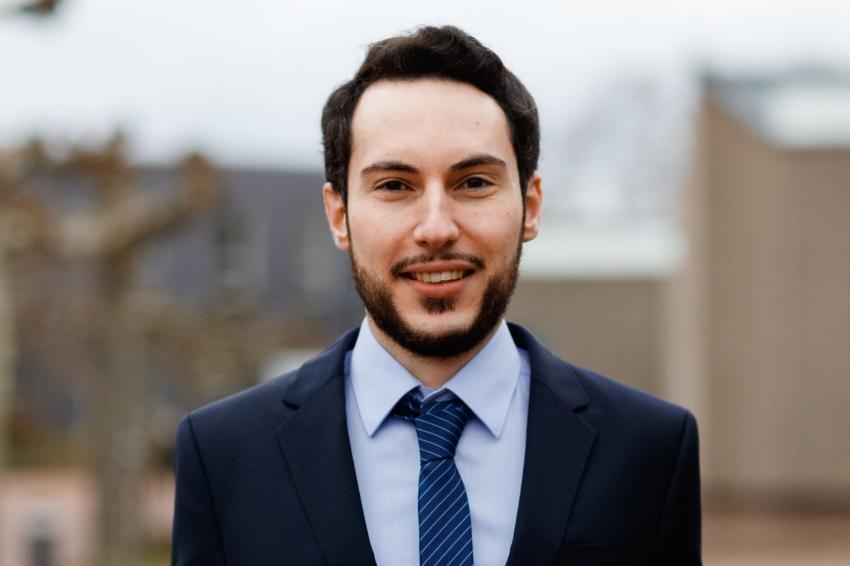 Since 2018, Heinrich Heine University Düsseldorf (HHU) and Bergische Universität Wuppertal (BUW) have been awarding the “Wilhelm and Else Heraeus Dissertation Prize” which is endowed with 4000 euros. ML4Q associated member  Federico Grasselli received the award for 2021. He works on  quantum protocols that can be used for secure communication.

In a two-stage process, with the participation of both scientists and students, the theses were honored. In the final stage, four pre-selected applicants were required to present their doctoral topic in a colloquium in a generally understandable way and to explain it in a question and answer session. The eight-member award committee, with equal numbers of representatives from Wuppertal and Düsseldorf, finally selected Federico Grasselli from HHU as the award winner.

Federico has been working in the group of Dagmar Bruß from the Institute of Theoretical Physics III on problems of quantum information theory, in particular quantum cryptography. The goal of this research field is to use concepts from quantum theory to find inherently secure communication and data transmission methods.

While quantum communication protocols for only two partners have mostly been considered so far, Grasselli developed and analyzed more general methods that allow more than two partners to exchange information securely. He quantified the security of these new protocols by using analytical methods to prove the maximum possible information gain of a spy. He also supported a research team at the University of Edinburgh that conducted the world’s first experiment in multiparty quantum cryptography. His research was funded within the European network “QCALL.” Now, Grasselli is continuing his research on the multiparty communication setting as an associate member of ML4Q within Focus Area 4.

Bruß states, “Federico Grasselli has made important contributions to the understanding of secure data transmission in quantum networks, helping to bring this future dream one step closer.” Hartmut Löwen, HHU member of the award committee, points out the high importance of the work for practical applications: “In his doctoral thesis ‘Security of Multipartite Quantum Cryptography’, Grasselli developed concepts that could ultimately lead to tap-proof bank transfers.”

Federico Grasselli, born in Perugia, Italy, in 1992, studied physics at the universities in Perugia and in Milan and received his PhD as a Marie Curie ITN Fellow at HHU in the research group of Dagmar Bruß with a thesis on quantum cryptography. He is now working as a postdoc at HHU and has already published several articles in high-ranking international journals as well as a book entitled “Quantum Cryptography: From Key Distribution to Conference Key Agreement”. He has received several fellowships for outstanding achievements.