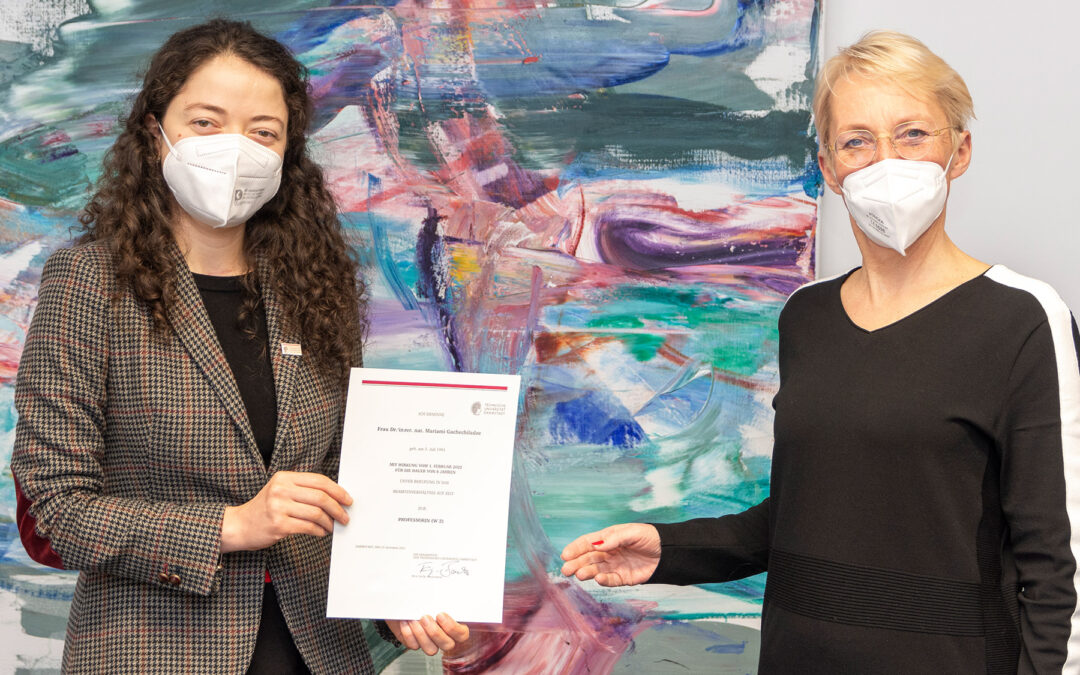 Mariami (to many of us just known as Mari) joined our cluster in its first year and worked in the group of David Gross at the Institute of Theoretical Physics in Cologne for 3 years. She finished her PhD studies at the Universities of Siegen and Innsbruck following up on her Master’s degree from the University of Oxford and her Bachelor’s degree in Mathematics and Computer Science from the American University in Bulgaria.

As of February 1, 2022, Mari has been appointed Associate Professor for Quantum Computing at the TU Darmstadt. The TU Darmstadt had a short interview with her on the occasion of starting her appointment. The interview was published in German on February 1 on the website of the Facultry of Computer Science. Here we are presenting an English version of the interview in order to share Mari’s thoughts with many of you as possible.

What was your previous scientific or professional station?
From 2019 to 2022, I worked as a postdoc at the Institute for Theoretical Physics at the University of Cologne.

What is the biggest milestone of your career so far?
Earning a PhD in theoretical physics as a computer scientist by training.

What fascinates you about your subject?
Our world is a quantum world, and after just over a century of hard work, we have managed to discover some of its extraordinary properties. We know that we can perform exponentially faster computations than we ever thought possible; we can teleport quantum states over long distances; we can communicate in secret; and, most importantly, no one can know the message we are sending (not even the universe itself). We read about the rapid steps being taken in academia and industry to build powerful quantum computers. We hear of the potential of quantum computing for chemistry, biology, finance, and so on.

On the one hand, quantum technologies promise a new scientific revolution. But more importantly (to me), all of these efforts are aimed at better understanding our nature and the true capabilities of our world.

The quantum computing theory we have today is elegant and accessible to undergraduate and graduate students from a variety of backgrounds (e.g., computer science, mathematics, and physics).

On the other hand, it offers the possibility to change forever even the most fundamental aspects of our physical world as well as computing and its complexity. It is a fantastic journey that I am eager to embark on with anyone who would like to join me.

Which department at TU Darmstadt would you like to spend a day in? Why?
I would love to spend a day in the Biology Department and learn about current research issues and challenges in the life sciences. The field seems to be developing tremendously and rapidly from the outside, and I would like to better understand the current state of the art. There is also discussions about the possible use of quantum physics and computers in biology, which of course fascinates me.

The best balance to a stressful day at work is …
… an hour of outdoor sports and spending a relaxing evening with loved ones.

As a female scientist from a third-world country I am less biased – hopefully!