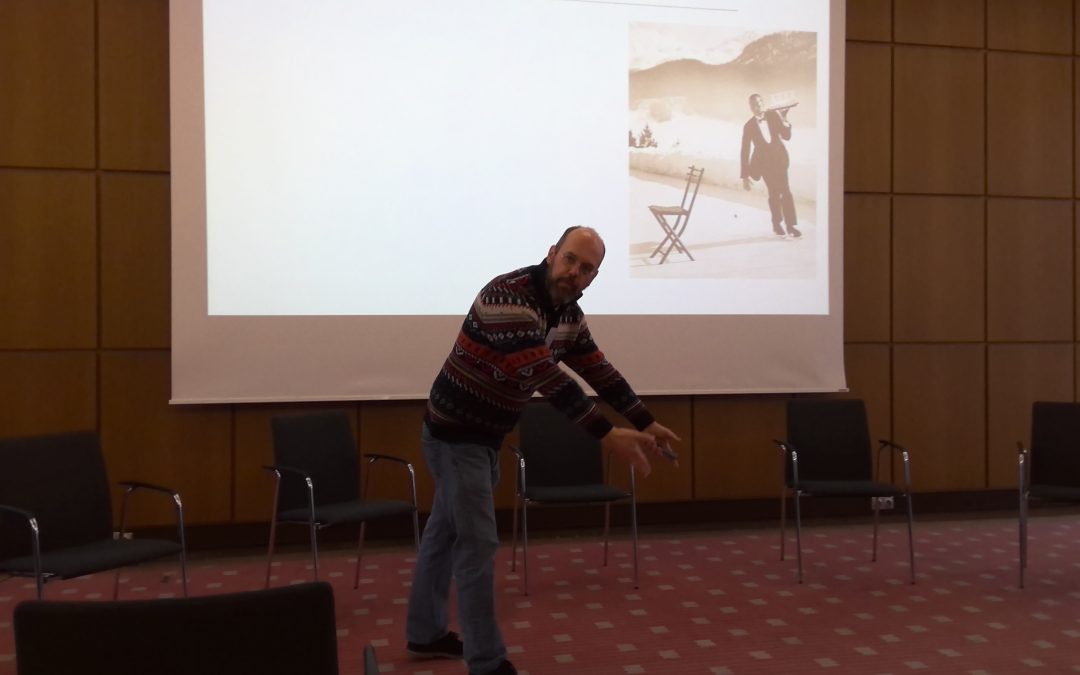 The ML4Q Technology Day 2022 took place on the 8th of December at the Neuer Senatssaal in the main building of the University of Cologne. I was excited and honestly a bit nervous when I was asked to chair the first session on Knowledge Transfer to Entrepreneurship. Nervous, because, for one it was a long-awaited encounter with the physicists and material scientists of this excellence cluster in my new role at the university. Besides, earlier attempts at opening a discussion on knowledge transfer have been met so far with a cold or at best a lukewarm response. But Magdalena and Daniel encouraged me and I am so thankful to them for some superb recommendations for the panellists for this session.

I bucked-up even further when, within minutes of my sending a request for an opening keynote, there came a GO from none other than Professor Tomasso Calarco! A professor of quantum information, Tomasso is also well known for his public speaking finesse on quantum technologies as demonstrated at various internationally renowned forums such as TEDx.  I had long been a fan of his art of making the highly involved quantum mechanics behind the quantum technological revolution palatable for dummies like me as well as for specialists. For the ML4Q Technology Day, though, he accepted an add-on challenge to take us through an interesting part of his personal journey as an entrepreneur.

Next, I was looking for an opening for the panel discussion. For this I browsed the ML4Q annual report 2021 and also had a quick word with Professor David Gross, the Cologne vice-spokesperson of the cluster. He thankfully eased my anxieties by brining home the point of avoiding delving in to the complexity of particular research results and to focus on the global tussle between knowledge creation and transfer.

My first impressions reading the report were as follows: ML4Q stands at an interesting juncture in time – at the middle of its 7-year funding period, some highly impactful and insightful results from its four focus areas and concomitantly an intensified but also quite diversified portfolio of government and EU initiatives, supplementing the bigger programs like the Quantum Flagship. The latter has origins in the Quantum Manifesto authored by Tomasso in 2016 and has not stopped to grow from an initial funding budget of around 1 billion euros to more than 7 billion euros as of 2022. The diversification of these incentives, though, gave me an impression that quite a bit private capital is also supporting some high-risk innovation. This in turn is suggestive of the fact that not all innovative power is concentrated in a few hands – a blessing for innovation in quantum technologies! 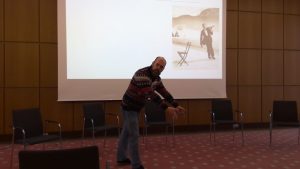 Tomasso did not over-promise, for, as he opened his talk with the application of quantum principles to get glasses of champagne from one edge of the Neuer Senatssaal to me on the other edge without different perturbations such as spilling or me noticing the ‘intentions’, I quickly got drunk over the science! How the optimization works and how errors can be reduced in a collaborative, remote and most importantly a gamified quantum environment was nicely driven home using further simplified analogies like the magnetic cup carrying hot fluid to be transferred to a tea cup using optical trap for creating the as many cold atoms as possible within a condensate.

At the core is his infectious enthusiasm lies his ability to act upon ideas and transform them into value for others. He helped found a start-up that creates such gamified software simulations for academia as well as industry supporting them remotely to optimize solutions to problems in quantum mechanics.

A few key insights from his personal entrepreneurial journey were elucidated nicely: How bringing the right emotion in the dry rational world of theoretical physics is vital when pitching your start-up to gain investors’ confidence; how to recognise a wolf in a sheep’s clothing when it comes to understanding competition vs. collaboration in securing funding for your start-up, or the basic spirit of acting on opportunities with courage, vision and creating room within growing domains like software licensing.

These insights were very helpful and formed the basis for opening the panel discussion on Knowledge Transfer and Entrepreneurship. I began by asking the audience how they felt when they heard about the term transfer. The responses on Mentimeter (picture below), were indicative of a knowledge gap in this area and yet a positive excitement. A surprisingly clear goal was given to us to reach at the end of the panel. 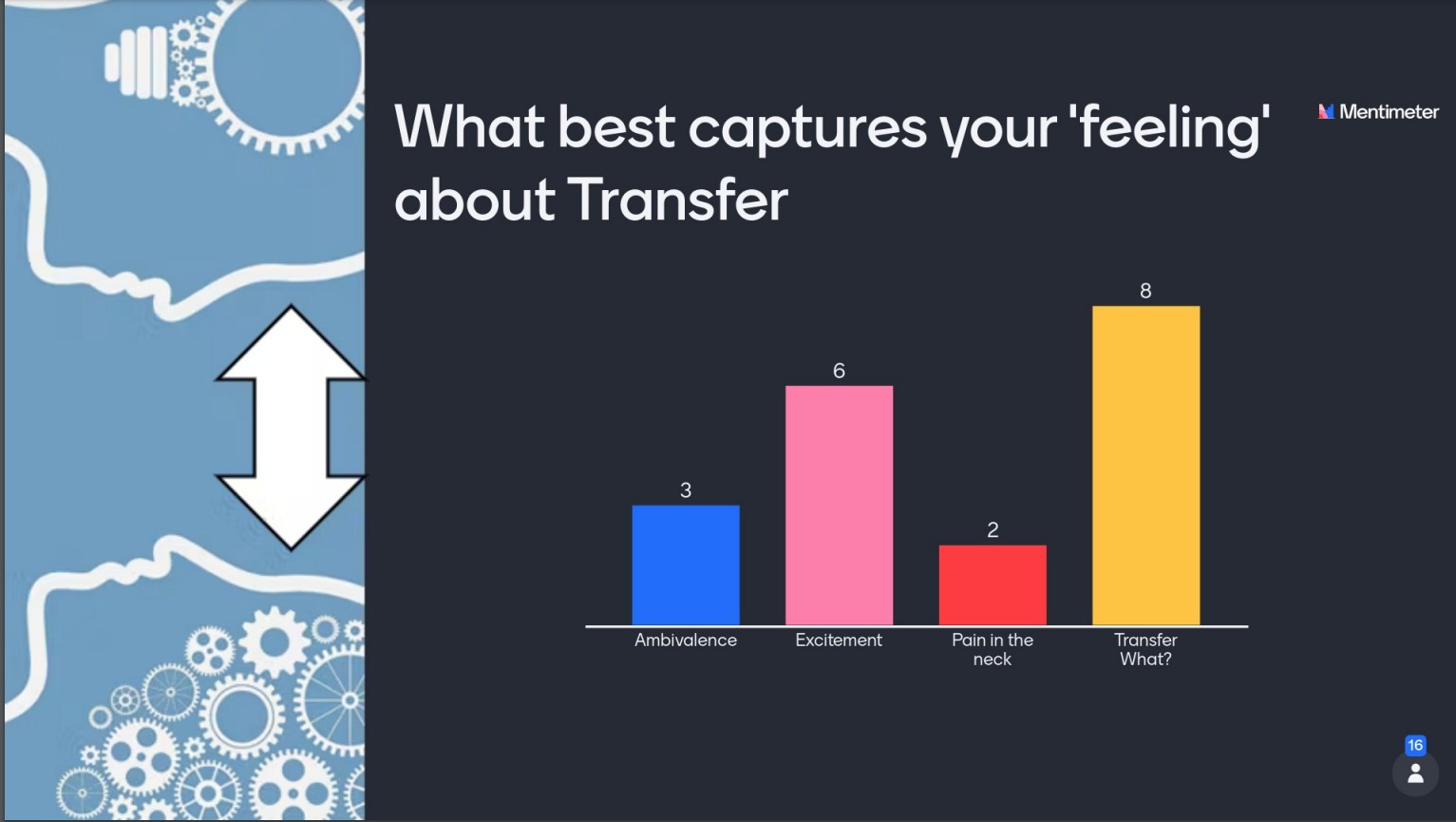 In inviting the panelists to the front, I further stringed this response to the very basic Tension: Fundamental research vs. Research Transfer by asking a very direct question. Why? Why is it the case that we do not have much IP generated or many quantum tech transfer projects.

Tomasso (first from the right) and Bernd Jungbluth (center), both scientists working actively on focus areas of the cluster, motivated the scientists by bringing home the message – “The time couldn’t be more opportune than NOW” in their own ways. Tomasso stated the dire need of the industry in filling competence gaps in the quantum computing as well as allied technologies. And, Bernd pointed out the ‘timing’ of protecting know-how as such i.e. patenting on two fronts: stage of life of a young researcher and timing of a publication.  Even when established academics, senior PIs say, may not necessarily wish to protect intermediate or final results as the next original contribution to a high impact journal can’t wait, the patent-first and publish soon-after argument safeguards the short-term career interests of a young PhD researcher. Additionally, both short and long term innovation and financial interests of the PI. Bringing along established track-record in developing applications in lasers and photonic quantum technology, Bernd further emphasized the acuteness of the needs of industry in this area vis-a-vie international competition.

Rob Harrison (second from the right) further pushed home this need by pointing out the current growth trend in filing of patents in the quantum technologies (chart below). A key aspect Rob explained was about the regionality of patents and how if certain government subsidiaries are pushing filing of intellectual property locally, e.g. for China, it may not pose a ‘real’ competition to the innovation in these areas as it is a regional influence.

I was myself wondering about a slightly different distribution given the high-risk research on building components of quantum computing as performed within ML4Q. About the distribution of these patents among the four different quantum technology areas, i.e. computing, sensing, communication and simulation. For this, I found the recent EPO Patent Insights Report on Quantum Technologies and Space quite insightful, albeit viewed through space sector lens. If not hardware components as end-products, the quantum computing researchers do create some exotic deep-tech equipment to test their research hypothesis and complex simulations based on algorithms. 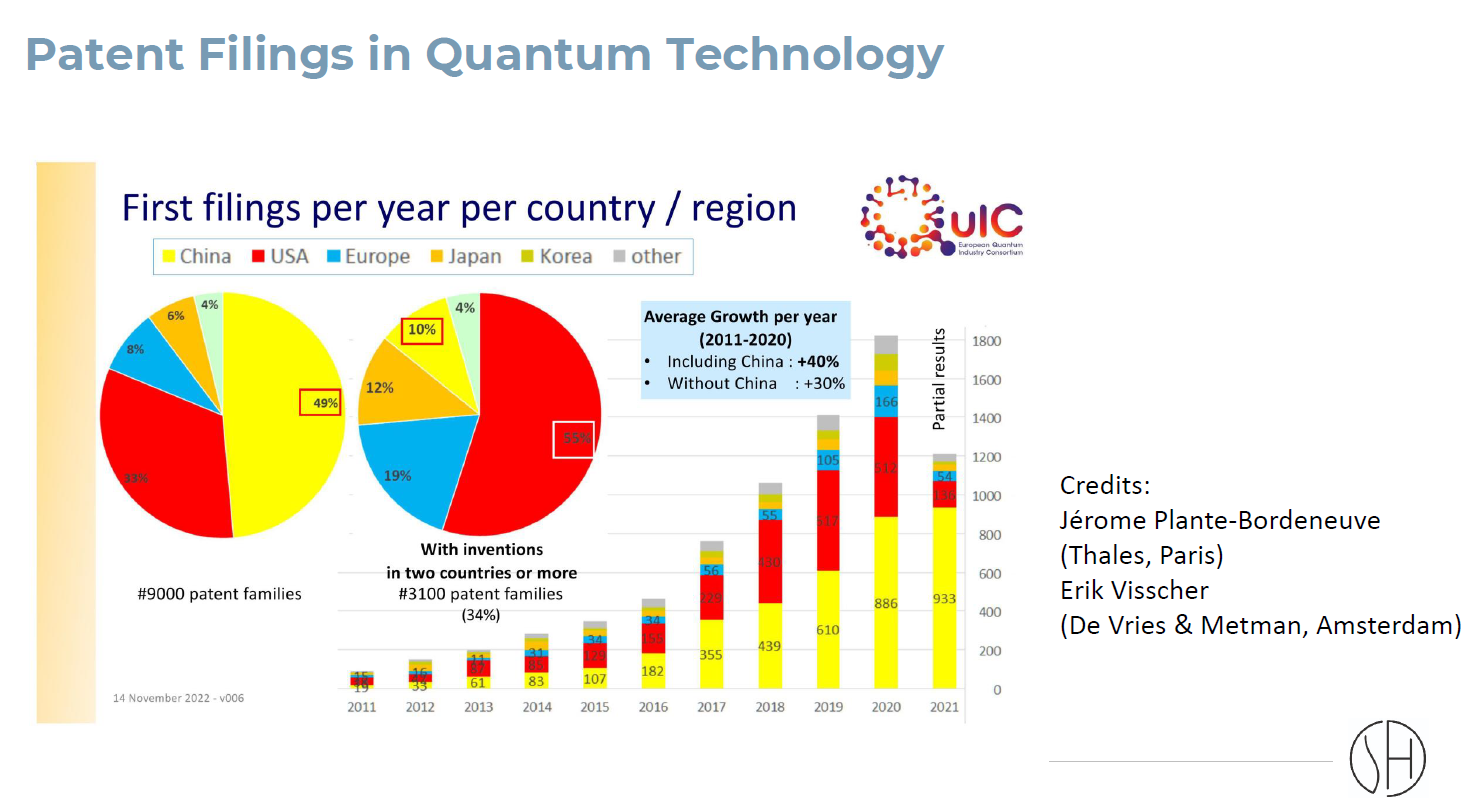 Thus, it was only appropriate to guide the panel discussion further into specifics of protecting algorithms per se and what subtle differences exists in doing so within the EU and the US, where, by the way it turns out to be a bit easier to protect algorithms. Rob explained clearly the legal perspective: When driving a technical hardware or simulating experiments using your algorithms there is a fair chance to go beyond the basic copyright for your software and think about a patent. In any case a clear message from most panellesits was that it is worth talking well in advance with technology transfer experts or lawyers  within your institution and seek information for your particular case.

The overall emphasis fell on discussing your results, talking to sparring partners such as innovation managers or transferscouts available at your research institutes, well ahead of the public dissemination of the same. Marc (second from the left) went further and elucidated approaches to break this barrier by creating more incentives in establishing an innovation culture at Universities. Bernadett (left), on the other hand, emphasized a need on innovation development bottom up and focused on different incentives available for researchers along its value chain at the universities and research institutions.

We concluded the panel discussion by reflecting on the response of the audience to the question on how would they wish to create even higher impact for their research. These are captured in the Mentimeter chart here: 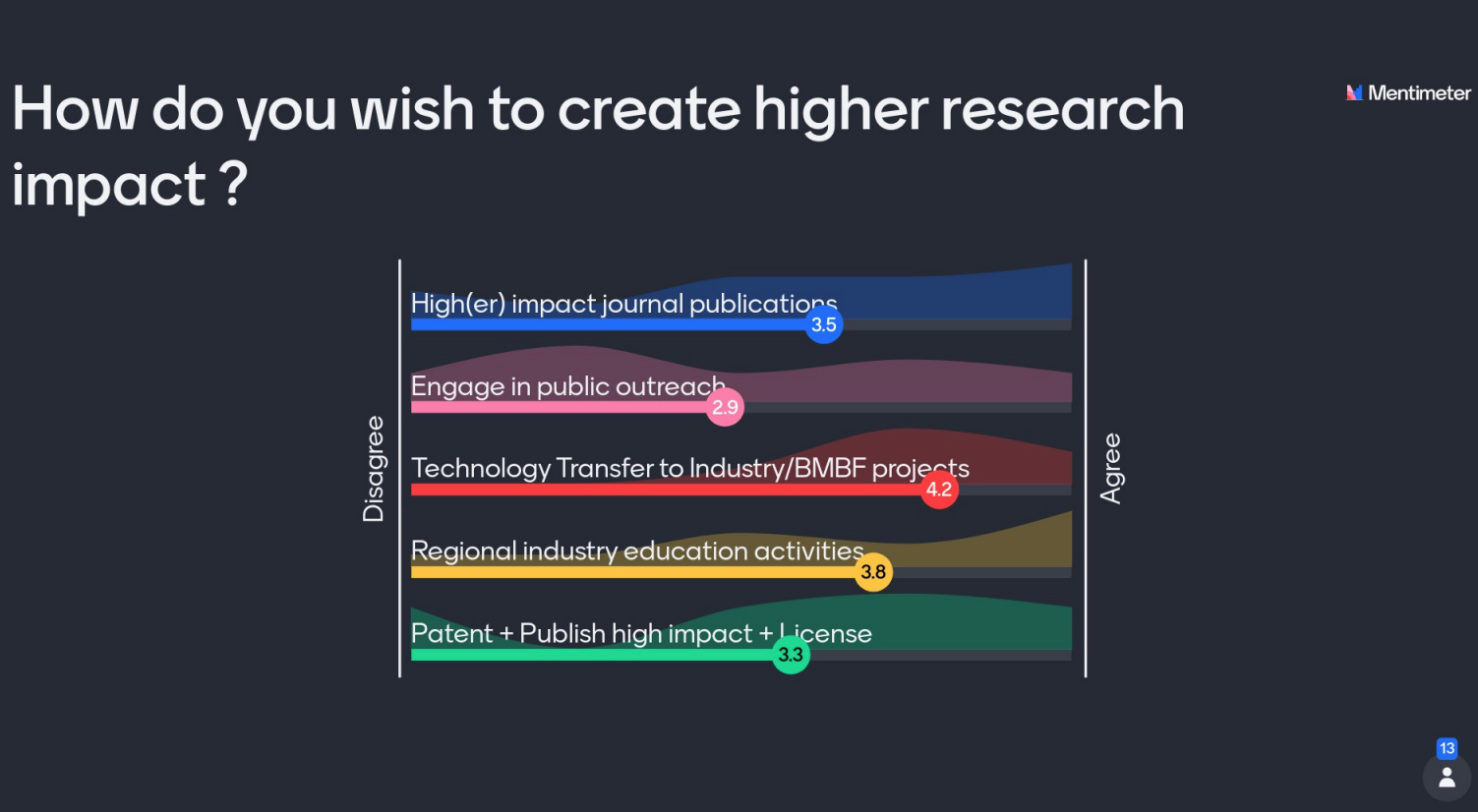 Although these different options of research transfer are complementary, it was personally satisfying to note that researchers in the audience were more inclined to turn their ideas into application for addressing the industry needs. As one clear result of the panel discussion, we were able to bridge some information gaps on needs and wants, the former being those of industry in the form of competences in quantum technologies and the later allude to the very basic curiosity driven “I want to have FUN doing science”.

On this encouraging note, I wish to thank all the participants and panelists for a fruitful discussion and extend warm invitation for a coffee, in line with our motto “let us make ideas work, together”! 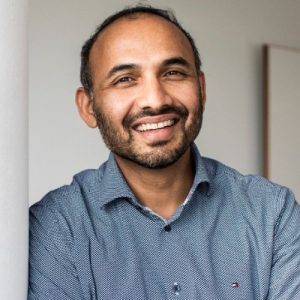 Dadhichi is passionate about innovation and transfer and has a broad materials science background. He has more than 5 years of experience in managing innovation projects in global technology projects in the fields of renewable energy, human-machine interfaces and smart functional surfaces for international companies and universities. In his role as transfer scout at the Gateway Excellence Start-up Center at the University of Cologne, he supports scientists to translate scientific innovations into commercial and social enterprises.