In an international multi-site cooperation, scientists from the ML4Q Cluster of Excellence are able to observe quantum effects in cause and effect relationship in a photonic experiment.

Understanding causal relationships in the observed data is a deeply rooted concept of our daily life. We do this task every time we try to connect two facts, but it is most important when we decide on a new medication or a new economic reform. On the theoretical front, a powerful mathematical tool called causal modeling can help discover causal dependencies in the statistics or predict which correlations in data are not possible if some independence assumptions are drawn. This tool has found a wide range of use in applied and purely theoretical research fields (e.g., economics, medicine, computer science, biology, physics, etc. ). Interestingly, this celebrated method for estimating causal relationships from the observed data is no longer valid in the quantum world. In the quantum world, objects behave differently as they might not have well-defined physical properties, such as, e.g., position or momentum.  Now, in an international team, ML4Q researchers at the University of Cologne, together  with the collaborators from Poland, Italy, and Brazil, have demonstrated that this peculiarity of quantum systems forces us to change the way we reason about causality. The study has been published in Science Advances.

“The key idea behind our proposal is to look at the so-called instrumental scenario, where causal influence of one variable on another can be estimated without actually measuring it ,” says Mariami Gachechiladze from the Institute of Theoretical Physics at the University of Cologne. “Interestingly, our methods can detect quantumness of the common cause solely from the observed data, when any other well-known techniques would fail.” explains Nikolai Miklin, another author of the study who joined the Emmy Noether group of Prof. Martin Kliesch, an associate member of ML4Q, at the HHU Düsseldorf.

The experimental realization of the study was performed in cooperation with colleagues from the Department of Physics of the Sapienza University of Rome. “Our experiment is based on a photonic platform with two variables A and B, between which the strength of the causal link is measured, being the results of measurements on a pair of entangled photons. In our experiment, we alternate between measuring the strength of the causal influence and estimating what such influence had to be if the common cause was classical. Based on that data, we measure the difference between the power of a classical and a quantum common cause, in other words, observing the difference between quantum and classical causality.” comments Iris Agresti, first-author of the study. 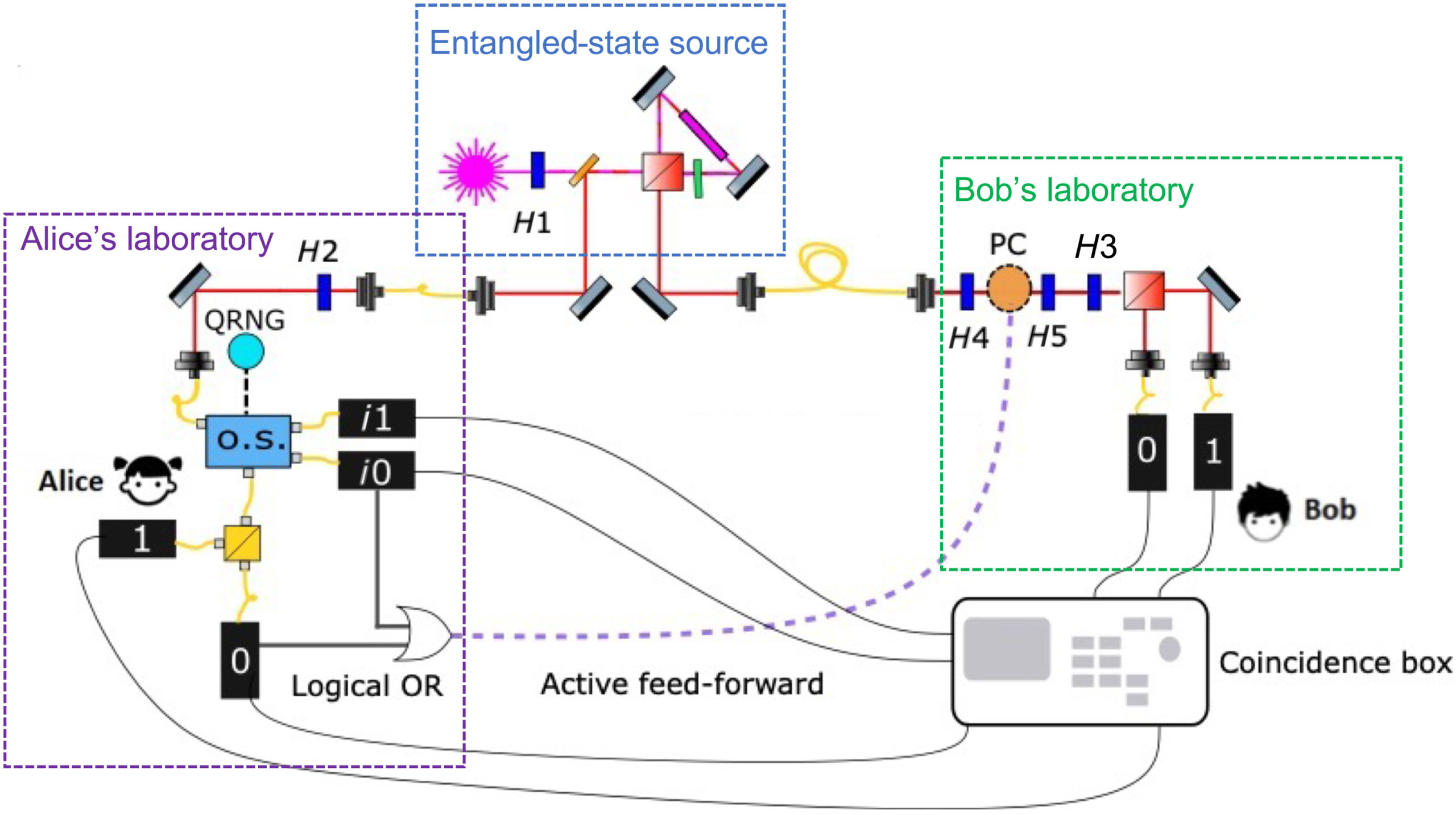 The experimental setup as described in Fig. 3 of the publication (https://www.science.org/doi/10.1126/sciadv.abm1515)

“The real challenge for the future is to establish a complete theory of quantum causality capable of faithfully interpreting data from any quantum experiment.”, explains Mariami Gachechiladze who finished her postdoctoral studies in the framework of ML4Q and recently accepted her new appointment as Assistant Professor for Quantum Computing at TU Darmstadt.

Talk by Mariami Gachechiladze on the basic idea of the publication