On being a cook and a detective in the lab 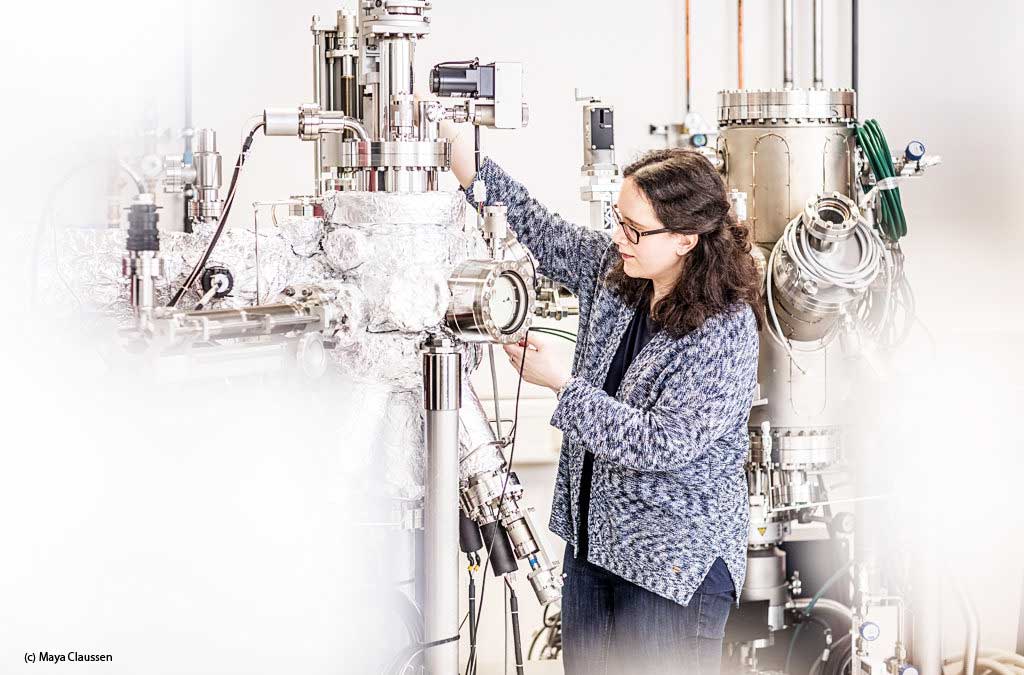 When people hear the term “quantum computer”, the pictures which come to mind first are probably the golden chandelier-like inside of a dilution refrigerator with all its cables and tubes or a photo of an actual computer chip. The machines which are available in the Topological Matter Laboratory Cologne to fabricate such a chip and measure a device using a dilution fridge are here presented in our Cologne fabrication map. 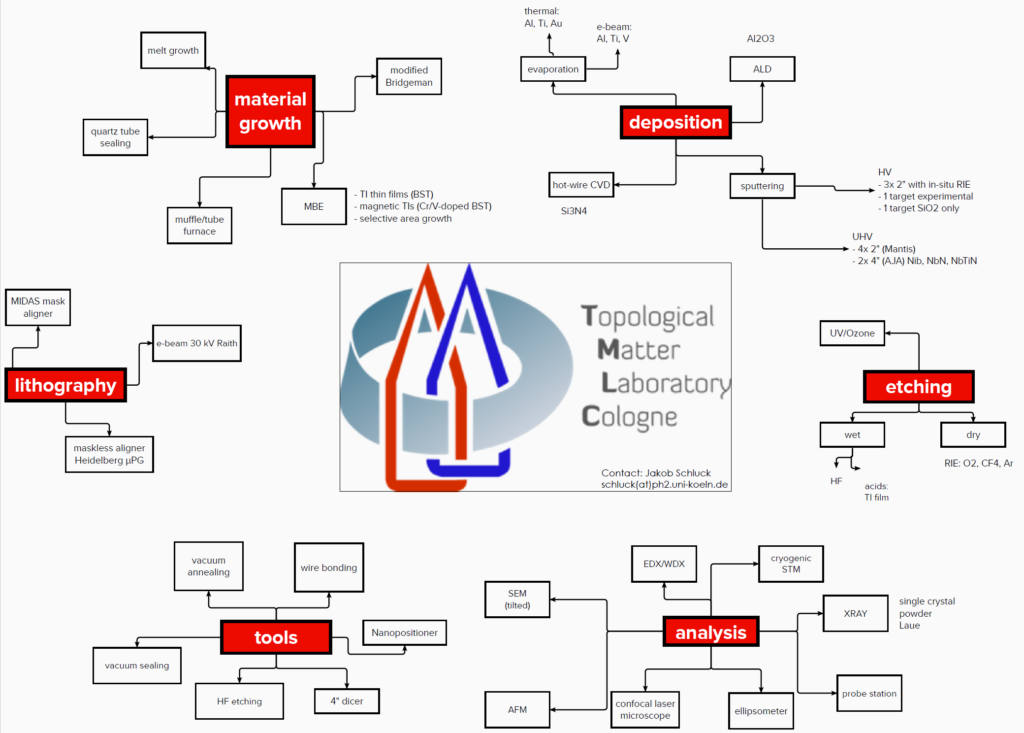 Click on the map to enlarge, then on the logo of the Topological Matter Laboratory Cologne for details on available fabrication facilities. For further inquiries contact Jakob Schluck at schluck(at)ph2.uni-koeln.de.

Most of this map is focussed on fabricating devices, which is obvious since this map is called fabrication map after all. What I focus on in my daily work might only be a small, single rectangle in the top left section of the map (the one that says MBE) and is a small, silver rectangle in real life (see image). However, without it, most of the other rectangles would simply be unused machines. 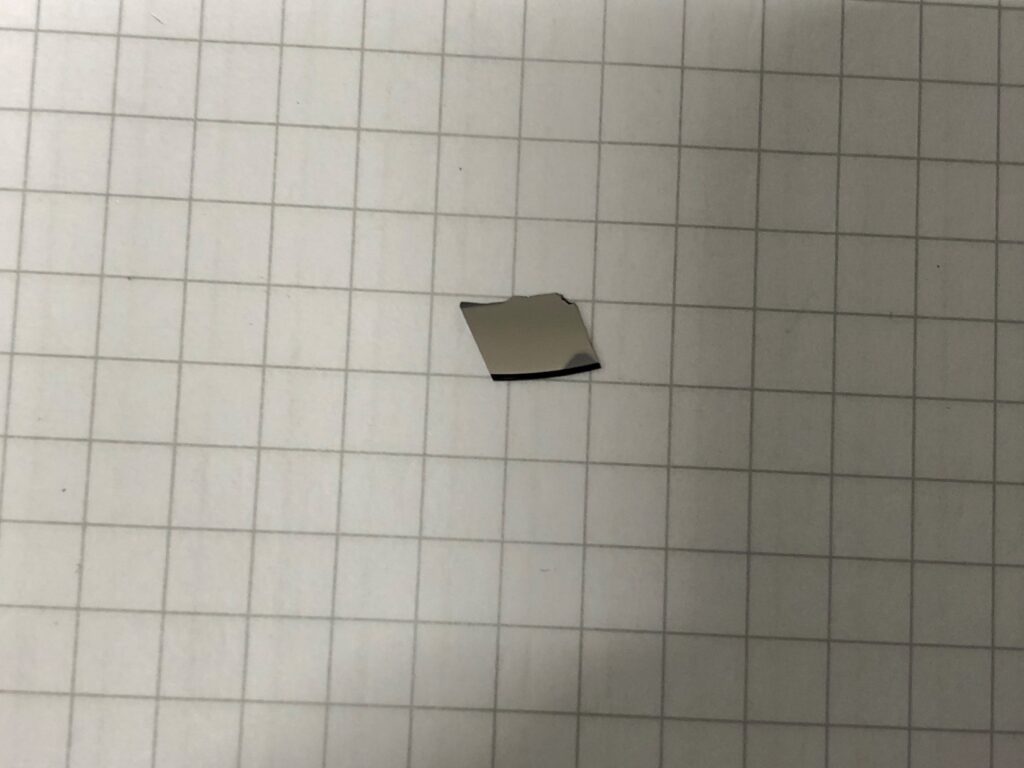 Image of an MBE grown film (provided by the author)

My work concerns one of the basic building blocks of topological quantum computers: the thin-film growth of topological materials by molecular beam epitaxy (MBE). With this method, high quality films are controllably grown with almost no impurities in an ultra-high vacuum chamber. Within such an MBE chamber, materials are heated in special evaporators and travel in the form of a molecular beam to a heatable substrate where the film begins to grow. To get an idea how thin these films are, I like to compare the thickness of the films (< 0.00001mm) to the thickness of a piece of paper (≈0.1mm) or a human hair (≈0.05mm). Even though the MBE chambers look quite fancy and spacy, growing such a film requires the combined skills of a cook and a detective.

The cooking reference makes sense because for the film growth you need: a) usually several ingredients, b) a growth recipe and c) a bit of magic chemistry. Because topological materials are often explained using a doughnut, it makes even more sense. Just like creating the perfect recipe for the world’s best lasagne, the recipe for the world’s best topological-insulator film must be well tested and fine-tuned. The basic ingredients we choose are bismuth, antimony and tellurium plus a substrate onto which the materials are deposited. If you want to spice things up, you can add a pinch of magnetic material or a superconductor on top to grow an even more sophisticated film.

Searching for the perfect recipe

What must be done to create the optimal recipe, is to find the suitable growth parameters such as growth temperature/time or the amount of evaporated material. For example, if you heat the substrate too high, the incoming material will not properly stick onto its surface and re-evaporate resulting in no film growth or a film full of holes. If the temperature is too low, the mobility of the incoming atoms is too low to form a single crystalline film. Furthermore, cleanliness during MBE growth is as important as cleanliness in the kitchen. The evaporation materials must be of high purity and the substrates need to be very carefully cleaned such that they are free of any contaminates. Inside the machine the vacuum needs to be as perfect as possible, therefore the MBE machines are baked out for roughly one week before being operational. 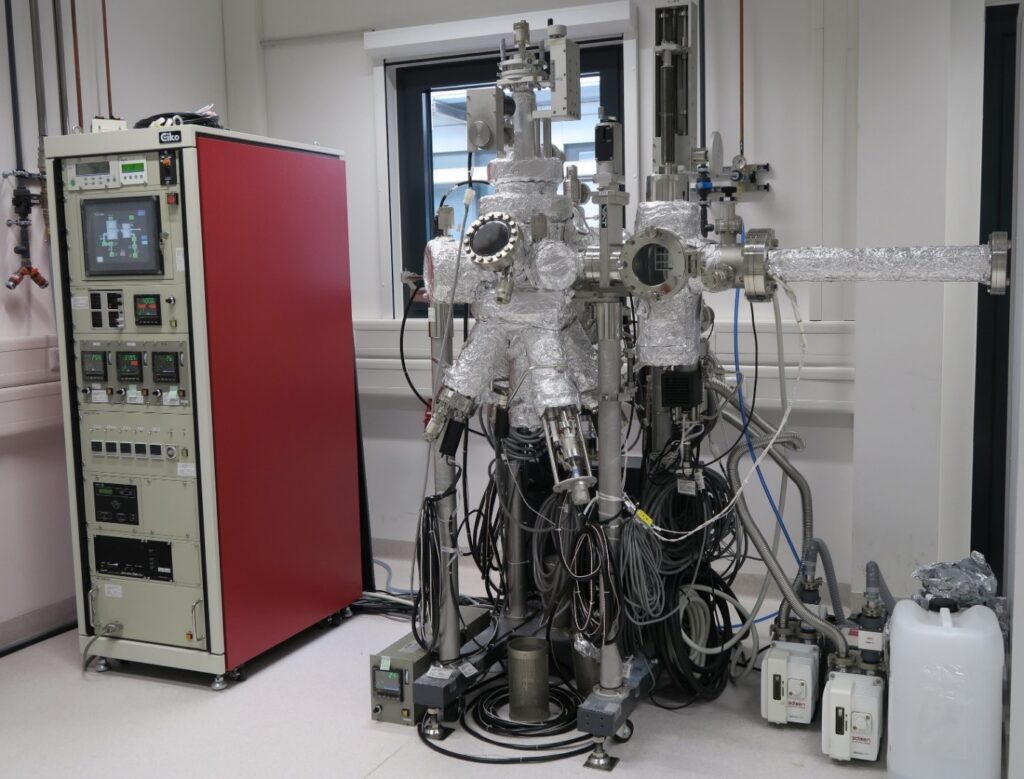 Inside the machine the vacuum needs to be as perfect as possible, therefore the MBE machines are baked out for roughly one week before being operational. (Image provided by the author)

After film growth, the detective work starts by analysing the growth in terms of outer appearance (in an atomic force microscope), crystallinity (using x-ray diffraction) and its electrical/magnetic properties (in a dilution fridge). If it’s really bad, one can also see it by eye, but we are of course interested in making the best possible film. One must consider all the puzzle pieces gained from the characterisation of the grown film and deduce from this information whether the growth was successful or what must be changed in the next growth cycle.

Just as it takes a chef some time to create the most delicious lasagne, after cooking a lot of burnt or salted dishes, optimising film growth is an art of its own. And as a detective comes to a dead end now and then by following the wrong leads or coming to the wrong conclusions, the MBE grower needs to collect all information and logically follow the lead to succeed. But a beautifully looking film with perfect electric/magnetic transport properties is worth all the effort!

(PS: Please stick to lasagne, do not eat any MBE grown films!)

More stories from our blog