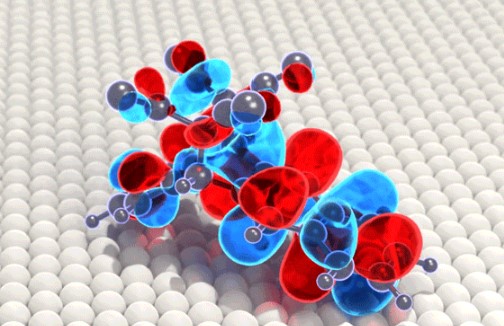 Quantum cinema in “Orbital Cinema” is to show for the first time how electron orbitals change during quantum leaps and chemical reactions. So far, this can only be simulated theoretically. (Image: Markus Huber, University of Regensburg)

ML4Q member, Stefan Tautz, has received an ERC Synergy Grant together with colleagues Marburg (Ulrich Höfer), Regensburg (Rupert Huber) and Graz (Peter Puschnig). The “Orbital Cinema” project aims to show for the first time how electron orbitals change during quantum leaps and chemical reactions which can only be simulated theoretically so far. The project will be supported with more than eleven million euros over the next six years. The prize can only be won as a team; with this prize category, the ERC supports scientifically groundbreaking endeavours by outstanding researchers that cannot be addressed by a single research group alone.

Electrons are fascinating particles. According to the strange laws of quantum mechanics, they have no exact location. Instead, they buzz around with a certain probability in areas of space also known as orbitals. The shape of these orbitals is reminiscent of balloons or soap bubbles that surround the atomic nuclei. The great scientific interest in these structures is due to the fact that orbitals are considered the key to a better understanding of chemical reactions and quantum processes, for example in quantum computers or solar cells.

“We want to see, in slow motion, how orbitals change when chemical bonds form or break. In the natural and life sciences, people have long dreamed of being able to precisely measure these orbitals. The challenge lies in the fact that, as quantum mechanical quantities, in a strict sense they cannot actually be observed directly,” says Stefan Tautz.

Link to the press release of Forschungszentrum Jülich