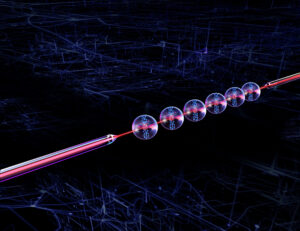 Illustration of a tapered glass fiber with nanofiber waist coupled to a series of superatoms. Image: Humboldt University of Berlin

ML4Q member, Sebastian Hofferberth, has received an ERC Synergy Grant together with colleagues from Humboldt University Berlin (Arno Rauschenbeutel) and Aarhus University (Thomas Pohl). The “SuperWave” project, led by Humboldt University Berlin, deals with the upscaling of quantum systems from individual photons and atoms. The projects will be supported with more than eight million euros over the next six years.

The “SuperWave” project is based in quantum optics. The researchers are investigating the interaction of individual photons with individual atoms. “A highly topical research topic is to now assemble these smallest possible systems step by step into larger materials,” says Sebastian Hofferberth from the Institute of Applied Physics at Bonn University. It is important, he says, that on the one hand the fundamental quantum mechanics remain and on the other hand an upscaling is realized.

Optics as a research topic has “split” in some ways over the past 50 years: In quantum optics, the fundamental processes are studied. In nonlinear optics, as well as in the vast field of engineering optics, phenomena and applications in “real” materials are explored. “A big dream is to combine these two fields,” Hofferberth says. Many groups are working on this with very different approaches. “In SuperWave, we are proposing a new approach that will hopefully lead us to this big goal,” says the scientist, who is a member of the Transdisciplinary Research Area “Matter” and conducts research in the ML4Q Cluster of Excellence at the University of Bonn.