With their superior properties, topological qubits could help achieve a breakthrough in the development of a quantum computer designed for universal applications. So far, no one has yet succeeded in unambiguously demonstrating a quantum bit, or qubit for short, of this kind in a lab. However, scientists from Forschungszentrum Jülich have now gone some way to making this a reality. For the first time, they succeeded in integrating a topological insulator into a conventional superconducting qubit. Just in time for “World Quantum Day” on 14 April, their novel hybrid qubit made it to the cover of the latest issue of the renowned journal Nano Letters.

Quantum computers are regarded as the computers of the future. Using quantum effects, they promise to deliver solutions for highly complex problems that cannot be processed by conventional computers in a realistic time frame. However, the widespread use of such computers is still a long way off. Current quantum computers generally contain only a small number of qubits. The main problem is that they are highly prone to error. The bigger the system, the more difficult it is to fully isolate it from its environment.

Many hopes are therefore pinned on a new type of quantum bit – the topological qubit. This approach is being pursued by several research groups as well as companies such as Microsoft. This type of qubit exhibits the special feature that it is topologically protected; the particular geometric structure of the superconductors as well as their special electronic material properties ensure that quantum information is retained. Topological qubits are therefore considered to be particularly robust and largely immune to external sources of decoherence. They also appear to enable fast switching times comparable to those achieved by the conventional superconducting qubits used by Google and IBM in current quantum processors.

However, it is not yet clear whether we will ever succeed in actually producing topological qubits. This is because a suitable material basis is still lacking to experimentally generate the special quasiparticles required for this without any doubt. These quasiparticles are also known as Majorana states. Until now, they could only be unambiguously demonstrated in theory, but not in experiments. Hybrid qubits, as they have now been constructed for the first time by the research group led by Dr. Peter Schüffelgen at the Peter Grünberg Institute (PGI-9) of Forschungszentrum Jülich, are now opening up new possibilities in this area. They already contain topological materials at crucial points. Therefore, this novel type of hybrid qubit provides researchers with a new experimental platform to test the behaviour of topological materials in highly sensitive quantum circuits. 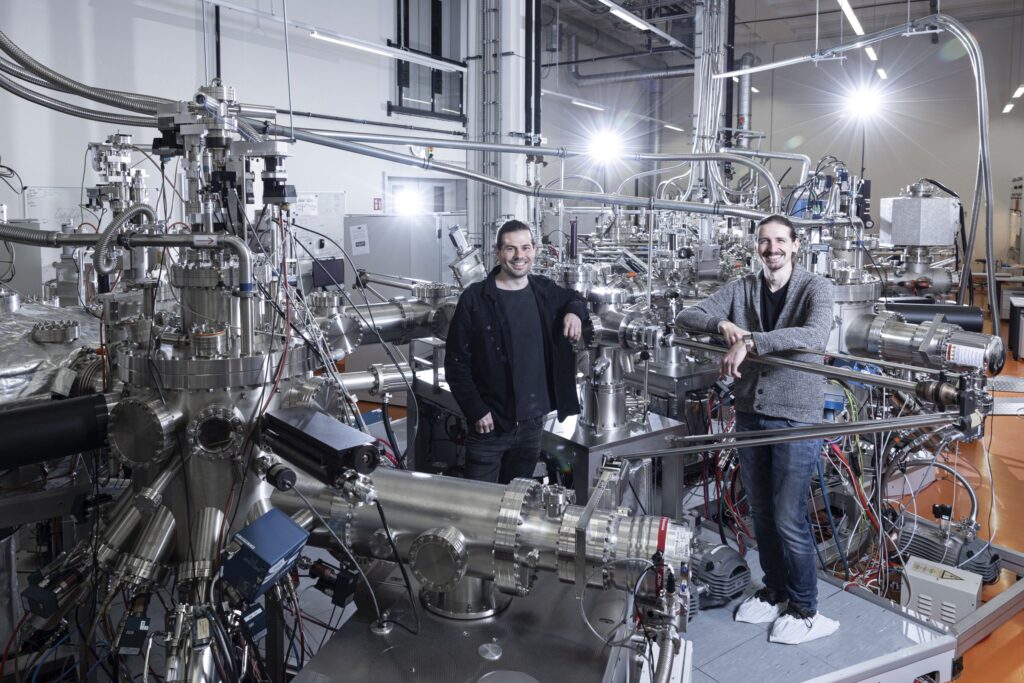 Interview on the state of research

Dr. Peter Schüffelgen, head of the working group for topological quantum computing at the Peter Grünberg Institute – Semiconductor Nanoelectronics (PGI-9), and Tobias Schmitt, the publication’s lead author, give an insight into the current state of research and the background to the current work.

What is a hybrid qubit exactly?

The qubit we are working on is a novel transmon qubit. Transmons are the backbone of today’s superconducting quantum computers and are used in the latest quantum processors by market leaders including IBM, Google, and Rigetti. The core component of a transmon is the Josephson junction, which consists of two superconducting electrodes separated by a thin layer of insulation. Instead of the normal insulator used in conventional transmons, we have now succeeded for the first time in integrating a topological insulator between the two superconducting electrodes.

Topological insulators are currently receiving a lot of attention in research, and their theoretical discovery was recognized with the Nobel Prize in physics in 2016. What makes these materials so special?

The metallic surface of a topological insulator also has another particular feature: the electrons it contains have special properties. Their spin – a kind of rotation around their own axis which is typical of electrons – is dependent on the precise direction in which the electrons move. This means that an electron moving in a particular direction, for example to the left, has a very specific spin – for instance, “up”. Accordingly, other electrons moving in the opposite direction have the exact opposite spin – in this case, “down”.

By integrating these special quantum materials into superconducting circuits, it is hoped to achieve a novel qubit known as a topological or Majorana qubit, which exhibits intrinsic protection against quantum errors. This type of qubit is expected to offer long coherence times – a measure of the lifetime of quantum states – and also enable fast switching times. In a single platform it will combine the advantages of the two main competing qubit platforms, namely ion traps with long coherence times and transmons with fast switching or gate times.

What is the significance of the new hybrid qubit for the research and development of topological qubits?

An important step towards achieving Majorana qubits involves integrating topological insulators into superconducting quantum circuits. And that is exactly what we have achieved in our latest study. Rather than integrating the topological insulator into a complex Majorana qubit directly, in our study we integrated it into a conventional transmon qubit first, as we already know how this device behaves.

Despite years of intensive research and development, no one before us has succeeded in integrating topological insulators in superconducting quantum circuits. This is mainly due to the fact that topological insulators are extremely sensitive to air. As soon as they are removed from the ultrahigh vacuum in which they are produced and are exposed to the air, they often lose their special properties.

The key to our success was to build parts of the overall qubit in the vacuum in order to prevent the topological insulator from becoming degraded on contact with air. The core component – the Josephson junction mentioned earlier – was thus fully fabricated in an ultrahigh vacuum and preserved with a protective coating before being taken to ambient conditions. This special fabrication technique was developed at Forschungszentrum Jülich with the help of experts from the University of Twente (see press release) and has now been used to produce qubits for the first time.

The quantum chips manufactured in this way are the first hybrid qubits based on topological insulators in which quantum coherence has been demonstrated. The measurements were conducted together with our cooperation partners in London and Copenhagen in different low-temperature laboratories.

Have there been any practical findings yet?

With regard to the development of a topological qubit, our results represent an important step towards technical implementation. For instance, some concepts for reading out Majorana qubits propose their integration into superconducting qubit circuits. This approach benefits from the mature control and readout technology that has been developed for conventional superconducting qubits. Our work shows that topological insulators can be integrated into such circuits in a scalable manner.

It is also worth highlighting that our ultrahigh vacuum process is not restricted to topological insulators. A wide range of materials that are selectively grown on silicon can be integrated into qubits using our technique. This is particularly important given that the suitability of the main material classes for topological quantum computing (InAs and InSb) is currently the subject of critical discussion. The underlying process makes it possible to efficiently integrate many other topological materials in quantum circuits, including some that have only recently been identified – and could thus provide important impetus for the field of topological quantum computing.

What are the next steps?

Our next move will be to attempt to demonstrate topological properties in our hybrid qubits based on topological insulators and to find evidence of Majorana zero modes in this device.

Following on from our successful integration of an individual topological insulator nanowire into a transmon qubit, the next step will be to integrate an entire network of nanowires into a quantum circuit. These networks will be required in future Majorana qubits to move Majoranas around each other and thus perform topologically protected quantum operations. We have already demonstrated that growing these networks is readily possible using the process developed at Forschungszentrum Jülich (see press release).

Who else was involved in this work?

The project was carried out within a wide-ranging international cooperation between universities and research institutions in the Netherlands, Denmark, the UK and Germany. The quantum chips were mostly produced in the Helmholtz Nano Facility (HNF) at Forschungszentrum Jülich. The study took place as part of the “MajoranaChips” project funded by the Federal Ministry of Education and Research (BMBF) and also as part of the ML4Q Cluster of Excellence, the Helmholtz project “Scalable Solid State Quantum Computing”, as well as the Bavarian Ministry of Economic Affairs, Regional Development and Energy within Bavaria’s High-Tech Agenda Project “Bausteine für das Quantencomputing auf Basis topologischer Materialien mit experimentellen und theoretischen Ansätzen“, and the German Research Foundation (DFG) project SPP1666.