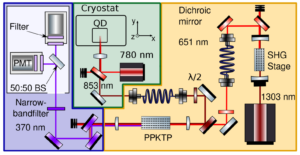 Schematic overview of the experimental setup, sub- divided into the single photon source (green), the frequency conversion module with the excitation laser (yellow), and the detection module for converted photons (blue). (Figure 1 of the publication)

ML4Q researchers from Bonn and Jülich have published recent results in Optics Letters on wavelength conversion at the single-photon level – a process required to forge a quantum network from distinct quantum devices. Such devices include solid-state emitters of single or entangled photons, as well as network nodes based on atoms or ions.

In this study, the authors demonstrate the conversion of single photons emitted from a semiconductor quantum dot at 853 nm via sum frequency conversion to the wavelength of the strong transition of Yb+ ions at 370 nm. They also show that the single-photon character of the quantum dot emission is preserved during the conversion process.