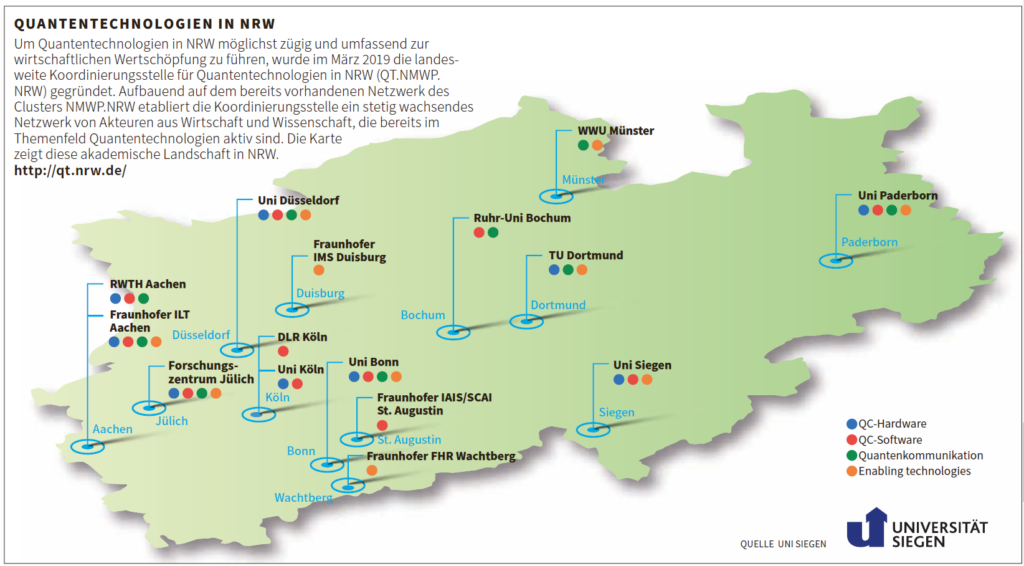 Scientists from North Rhine-Westphalian universities in Aachen, Bochum, Bonn, Dortmund, Düsseldorf, Cologne, Münster, Paderborn and Siegen, as well as the neighboring non-university research institutes of the Fraunhofer Society (ILT, FHR, IAIS, SCAI), DLR Cologne as well as Forschungszentrum Jülich presented an impressive concentration of expertise in basic and applied quantum sciences and technologies in a special publication in the Frankfurter Allgemeinen Sonntagszeitung and Welt am Sonntag on January 30, 2022.

The publication focusses on quantum computing and presents ongoing research projects for the development of hardware and software. Emphasis is placed on the upswing that the research landscape in NRW has experienced in recent years, due to the establishment of several Clusters of Excellence in the region (ML4Q in the Rhineland as well as CASA at the Ruhr University Bochum). Especially in the field of quantum algorithms, the region benefits from a growing dialog between physicists and computer scientists from NRW universities. This concentrated mass of expertise is ultimately the reason why numerous scientists from the region were among the winners of the BMBF’s and BMWK’s calls for funding in 2021 to strengthen the links between basic research and industry.

When our quantum systems have arrived in practice, they will fundamentally change communication and information technology.
(Prof. Christine Silberhorn, University of Paderborn)

And last but not least, the implementation of revolutionary ideas from research in the field of quantum information science would not even be possible without many technologies. Here, the Fraunhofer Institutes, the Forschungszentrum Jülich and various university research departments act as experts in these so-called enabling technologies, such as the basic technology photonics or the technology platform microelectronics.