Several scientists around ML4Q members, Bert Voigtländer, Stefan Tautz and Detlev Grützmacher, at Forschungszentrum Jülich have succeeded in taking an important step towards the realization of novel electronic components. Using a special four-tip scanning tunneling microscope, they were able to measure for the first time the extraordinary electrical properties that exist in ultra-thin topological insulators. These result from the fact that the electron spin is coupled to the current direction, which is a prerequisite for use in a topological quantum computer.

The high error-proneness of quantum bits, or qubits for short, is one of the main hurdles in building practically usable quantum computers. So-called topological quantum computers are considered an elegant and promising solution to this problem. The sensitive quantum information in such a computer is particularly well protected against errors by the choice of certain materials. However, the concept exists so far largely only on paper. The search for a material system with the appropriate properties is still ongoing.

The idea of a topological quantum computer is based on the use of topological insulators. These are a novel class of materials with very special properties: The materials behave like an insulator in their interior, so they do not conduct electricity there, but their surface is conductive. The direction of motion is strictly coupled to the spin of the electrons.

A special case are the 3D topological insulators discovered only a few years ago. These are, if you think of them as a cube, conductive on all six sides. However, the conductivity at the surface decreases as the 3D insulators are made thinner and thinner, as researchers at Jülich’s Peter Grünberg Institute for Quantum Nanoscience have now shown. What finally remains is a thin layer, only a few nanometers thick, with four conductive edges where electric current continues to flow in a directional manner.

Because of their special properties, the ultrathin topological insulators are interesting materials for applications in spintronics – that is, for the development of devices and components that use electron spin to process and store information. In combination with superconductors, they could also be suitable for realizing other, even more exotic effects that can be used in topological quantum computers. 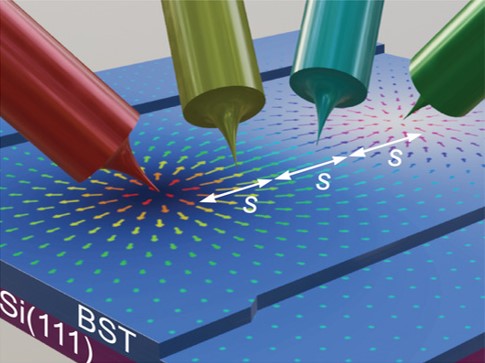 The experimental setup of the study as it appears in figure 1 of the publication (image: Forschungszentrum Jülich / Vasily Cherepanov)

For their measurements, the researchers used a special scanning tunneling microscope with four tips. The instrument, developed at Forschungszentrum Jülich, makes it possible to perform electrical measurements under high-purity conditions on extremely small structures. The current study also used a new method that makes the positioning of the measuring tips even more precise with an accuracy of a few nanometers. Using the “nano-multimeter,” the researchers were able to demonstrate for the first time that the nanoscale electrical properties of the thin films behave as theoretically predicted. The observation is important for a deeper understanding of the topological insulators and crucial for their further development with a view to potential applications.