But what is it that you actually do? ~ My thoughts on science management

When I talk to people from different fields about my job, the variety of reactions often surprises me – ranging from the always fun “But what is it that you actually do?” (which I occasionally even hear from people who have spent their whole life in Academia) to wide-eyed surprise at the scope of managing a research project like a Cluster of Excellence with a handful of partner institutions. Quite often, the German job description of “Geschäftsführer” (which is a somewhat ill-defined term often equated with “CEO” in an industry context) leads to rather misleading ideas and questions about business dress codes, commercial procuration, etc…

At the intersect of science and administration

In the end, it often boils down to the question Does your job feel closer to science or to administration?.

I tend to give the (somewhat unsatisfying) answer that science management is very much its own field at the intersect of the two. I very much like the phrase “science-enabling” in this context, since it puts a positive spin on a dilemma that many (if not all) researchers face nowadays: Not too long ago, a scientist at a university had two main tasks, namely doing research (duh) and teaching/mentoring students. Of course, this is no longer true (if it ever even was) – the term “third mission” has been around for quite some time (touching on aspects such as technology transfer, public outreach, etc.), and of course “doing research” also requires hiring people, leading a team, and, in many cases, running a lab. In particular in a field such as quantum science and technologies, where new funding lines are popping up left and right during these exciting times, most research groups are involved in many different structured programs, and acquiring (as well as administering!) large grants has become yet another central task for scientists.

Tasks such as “proper” project management and quality control, have now become a regular part of the scientific process.

This is where science management comes in. The need for persons dedicated to coordinating research projects has increased a lot with the growing fraction of third-party funding in the universities’ budgets. Even tasks that we in Academia (at least in physics) are often not particularly great at, such as “proper” project management and quality control, have now become a regular part of the scientific process.

So the field of science management has grown tremendously in the past years. I am lucky to work in an environment where its importance was realized and appreciated early on. In fact, I was already hired at the proposal stage of our cluster, when the coordinative efforts of such a large-scale, multi-site proposal became clear. Thus I was able to see ML4Q grow from the initial proposal to the now operational cluster with an annual budget of several million Euros and roughly 200 contributing researchers.

In my day-to-day work, I write emails, fill Slack channels, coordinate deadlines/proposals, herd cats (i.e., professors), and occasionally mediate or help create consensus within the project. The cluster team organizes retreats, conferences, or seminars, and assists in hiring processes. We keep spread sheets of the budget to make sure the money is spent “well” (i.e., according to the decisions of our Steering Board, and of course obeying the rules of our funding agency, the DFG), and help implement the cluster’s central measures (related to outreach, equal opportunity, early-career support and more).

What we spend most time and energy on will depend on the structure of the individual cluster, the field of research, and, in the end, what the project spends its budget on.

When interacting with my colleagues from other clusters (we are well-linked both locally and Germany-wide), the differences between our day-to-day tasks are astounding. While there are of course challenges that we all face alike, the question of what we spend most time and energy on will result in very different answers depending on the structure of the individual cluster, the field of research, and, in the end, what the project spends its budget on: Is the cluster planning to establish new professorships? Are there lab facilities in the cluster that require purchases of large-scale equipment? How about plans for new buildings, institutes, etc.? These are just a few examples of important topics that can easily fill up the schedule of everybody involved for quite some time… In this sense, our networks are a central competency of us science managers: the low-threshold communication with our colleagues enables us to find synergies, and avoid falling into the same traps twice.

New responsibilities as a manager of a Cluster of Excellence 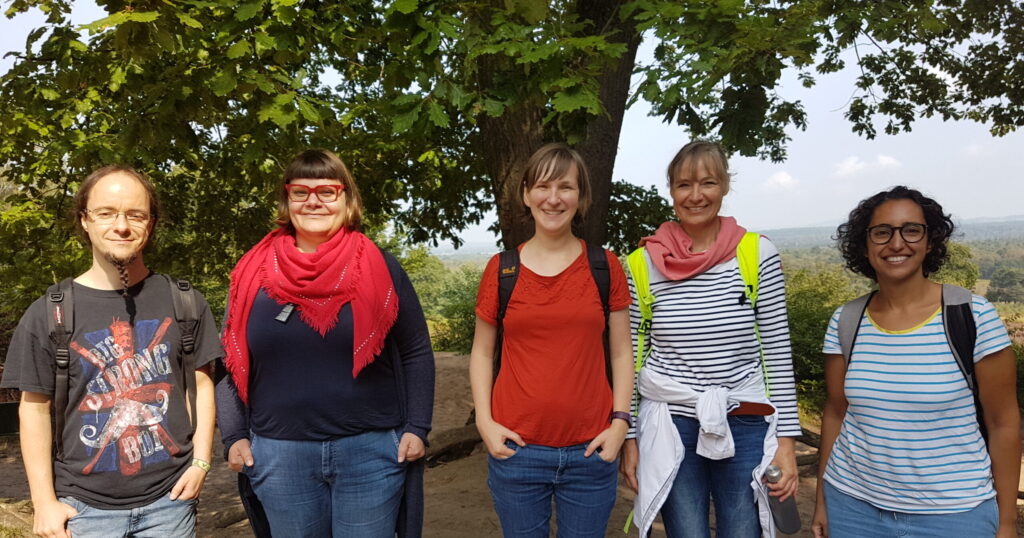 There are two more aspects I’d like to stress, mainly since they were quite new to me after my previous jobs in science management. The first (and probably most important) one is team management – I am in the extremely grateful situation to have an amazing team in our ML4Q office(s). We all have our dedicated tasks, but we very much work together as a unit. Of course, this means that I spend a significant amount of my working hours coordinating the team, which, in the beginning, took some getting used to: From my previous science management experiences (in notoriously understaffed projects, and more often than not with several jobs in parallel), I was quite used to “doing everything myself” (and often in a rushed way, struggling to hit deadlines and keep everything running). Now, while my job feels less “hands-on” and more coordinative than before, it is rewarding to see that finally, there is sufficient capacity to also handle topics that were previously often neglected “properly” and in a way that feels fitting for a project of the visibility and scope of ML4Q.

The second aspect is of a more strategic nature: Compared to other funding lines, clusters are very flexible, which is of particular importance in our fast-moving field of quantum science and technologies, with its ever-growing network of alliances, international collaborations, and high-impact initiatives on a German and European level (and beyond). In order to stay on top of this cavalcade of developments, we have recently established the ML4Q Strategy Board. Being involved (in a coordinating manner) in such high-level strategic processes (and often witnessing political developments more up close than usual) is a rather new aspect of my job, and extremely exciting!

So my work life has changed a lot more since the start of ML4Q than I anticipated, which is very enriching and makes me feel grateful to work in such a vibrant environment. I’m not sure whether those readers who started from “But what is it that you actually do?” now feel more or less confused than before – please feel free to send me feedback in case you would like to read more about this topic!

I got my first fix of science management as a student when I assisted my supervisor in the coordination of a Germany-wide project on the cosmological evolution of galaxies. Over the course of my PhD in astrophysics, it became clear that I enjoyed managing and coordinating research projects much more than the science itself – so, after graduating, I decided to jump into science management full-time. Following some trips into other projects in Bonn and Cologne (including the joint grad school in physics, the BCGS), I found my way to ML4Q.

To some degree, science management shares both the pros (such as the freedom and flexibility of an academic work environment) and cons (most importantly, the lack of permanent positions) with a scientific career – but at least in my case, it has proven much more tailored to my skills and, most importantly, to what I enjoy in my work.