Phyphox: Seeing the world through your phone’s sensors

Have you heard of the app phyphox?

If you have school age children or are a teacher, you probably have. If not, you might have stumbled onto it as a nice gadget on a tech blog. At 1.5 million overall installations, it is far from being in the league of Facebook, Instagram or Snapchat, but that number is large enough to assume that some of you have stumbled upon it at some point.

So, what is this app all about?

Well, phyphox is not a game or a social media app – it is a physics app. It uses the phone’s sensors as measuring instruments in physics experiments. The frequency of a spring oscillator is determined with the accelerometer, the resonance frequency of a wine glass is analyzed with the microphone or the Oersted field from an electrical current is measured with the magnetometer. It turns smartphones into small labs – for free.

The main menu of phyphox allows for raw data acquisition as well as ready to use experiment-specific configurations. 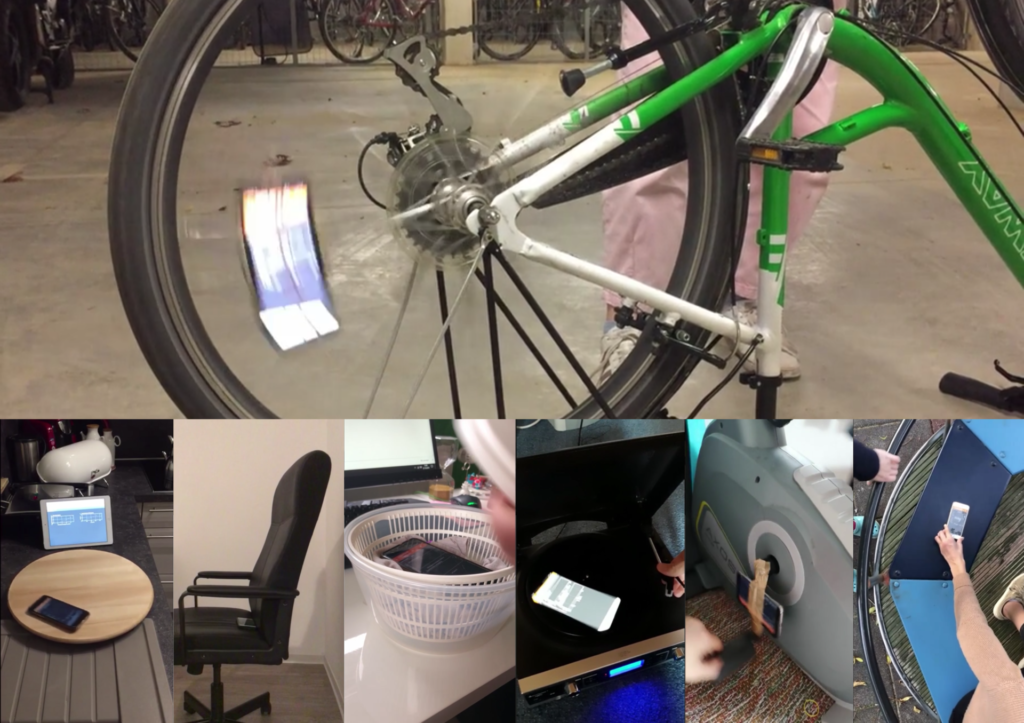 We originally designed the app for our own lecture. Inspired by similar concepts in other sensor apps, we designed phyphox specifically for our “Experimental Physics I” lecture for first year physics students at the RWTH Aachen University. When Professor Christoph Stampfer was about to hold this exact lecture for the very first time, he realized that many of its classical mechanics experiments could be conducted by the students themselves with their own phones. A member of his staff, Dr. Sebastian Staacks, has had some experience in coding apps, so why not create an app specific for the needs of this lecture.

One year later in autumn 2016, phyphox was published and tested in this lecture. The reception from the students was extremely positive and we could see video contributions of our student’s self-build pendulums or how they explore centrifugal acceleration with swivel chairs, bicycle wheels or on merry-go-rounds. – In a 300 student lecture where experimentation is usually limited to the stage.

However, while this is what we were hoping for, we did not anticipate the reaction from outside our university. Sure, we created a website, a documentation and a few demonstration videos. But the sheer numbers were overwhelming: 100,000 installations within the first year, 1 million shortly after completing the third year. We also did not expect to get distinctions from the MNU (German science teacher’s association), the AGPP of the DPG (workgroup for physical lab courses within the German Physical Society) and the Stifterverband (organization to further education, science and research).

The pressure sensor can be used to determine the speed of an elevator.

It turned out that schools love to use phyphox

While some example experiments may be aimed at university level, there are plenty examples on how this low-cost data acquisition can modernize school experiments just by using the student’s own phones. For example, the speed of sound can be measured directly with two phones using the “acoustic stopwatch” in phyphox. Young students do not need to interpret a plot and only need basic arithmetics to get a result in the range of 300 m/s to 370 m/s. Fortunately, almost from the very first moment we teamed up with Professor Heidrun Heinke, who oversees the didactical aspects of phyphox ever since.

As we clearly see school vacations in our installation statistics, we are quite confident that in fact a large majority of our users download phyphox as an educational tool. However, even those who install phyphox as a gadget will (maybe inadvertently) learn some physics by playing with it in everyday situations, like using the pressure sensor to determine the speed of an elevator. If you do that, it is hard to miss the change of atmospheric pressure with elevation. Similarly, it is hard to miss the lower pressure in the passenger cabin of an aircraft – or the pressure drop when flushing its toilet.

Over time, as support requests from teachers increased along with studies on airborne lavatory use on social media, the phyphox team has grown with PhD students by research grants from the Federal Ministry of Education and Research in Germany and several employees financed by the Hans Hermann Voss foundation.

Similarly, the functionality of the app is steadily growing as well. At a first glance, when just opening the app, there is not that much of a difference, as we do not want to disrupt existing worksheets and instructions from teachers. However, if you just look below the surface, you might fall into a rabbit hole of possibilities.

Example of a QR code. If scanned in phyphox, you get a configuration that plots the accelerometer’s z readings in a histogram to demonstrate normal distribution.

Phyphox is extremely open in every sense

Sure, it is free and Open Source, but very few users are going to adapt the code to do a specific experiment. Instead, phyphox offers several interfaces to adapt it to any educational situation. The app is built around an XML-based and entirely documented file format that defines which sensors to use as data source, which mathematical operations to apply to the data and how to present it to the user. In fact, every configuration in the main menu is defined in that file format and can be changed by the user. Either by using our web editor or by directly changing the experiment file. When satisfied with the customized or entirely new setup, it can easily be given to students via a simple QR code.

This system allows us to add many advanced features without disrupting the user experience of young students or putting off educators when they first learn about the app. Advanced users can simply use a QR code to change all the settings they need.

Phyphox can easily exchange data with pretty much any programming language. On one hand, you can use its “remote access” feature. It allows for simple remote control from a laptop or tablet even for beginners, but it can also be used as a REST API to read the sensor data from a programming language like Python to be used in real-time. On the other hand, you can set up a QR code that tells phyphox to send acquired data to a specific server or retrieve data from it.

In this way, Phyphox can be the data source for, but also the means to visualize data from one of your projects or experiments, allowing some interesting ideas for involving visitors in open lab events. This is accompanied by a Bluetooth Low Energy interface to interact with external sensors – usually without any need for the manufacturer to know about phyphox when the device was designed. Do you have some Arduino projects in which you collect data? Good news, there is a phyphox library that allows you to connect your Arduino to phyphox and plot the data on your phone by just adding three lines of code. 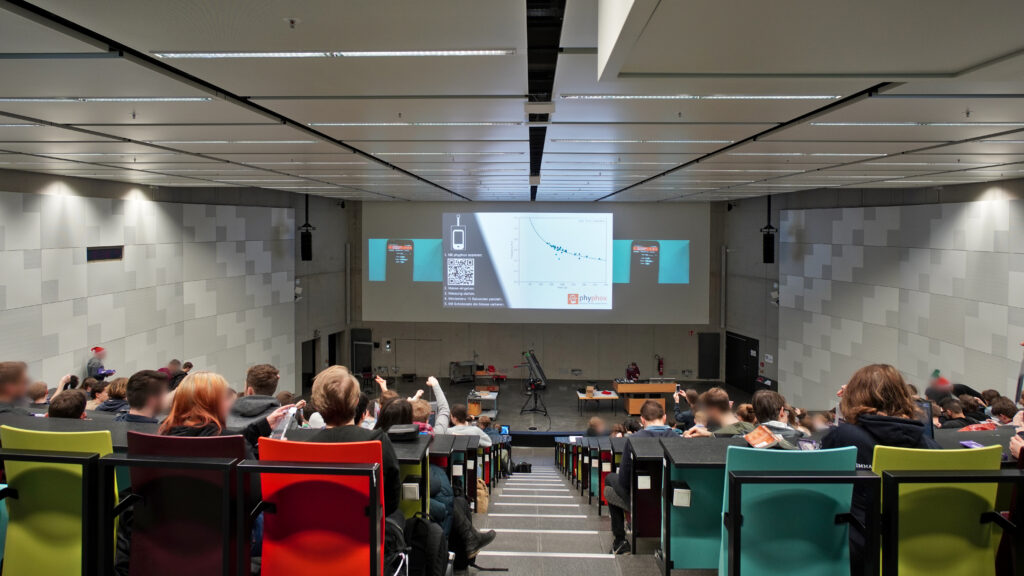 An entire lecture collaboratively generates data that is presented on the main projector.

Example code to submit random data from an Arduino to phyphox with our Arduino library.

Despite all these additions, our list of features to add to phyphox is still growing faster than the list of features already implemented. We receive exciting ideas from our community on a daily basis and even after four years, we are still amazed by new physics experiments we find for our phones. If you want to discover these new ways with us, check out https://phyphox.org or browse through the short clip on the phyphox YouTube channel to learn about smartphone experiments, your phone’s sensors or how to incorporate phyphox into your projects.

More about the app development experience

Sebastian, how long did the app development take and how did you experience the journey from the idea to the app store?

Actually, we did not plan for phyphox to become so big and wide-spread to begin with. It started out as a little side-project for our first-semester students, so it is difficult to give an exact number on the development time. It felt very rewarding nevertheless as I always enjoyed coding such things and when we started to work on phyphox it was a very nice change to work on an app.

Now that the app is a real success, do you still want phyphox to be a free app? Are you planning to introduce any premium app packages or the like?

Phyphox is not only free, but Open Source (GNU GPLv3). This decision is on one hand rooted in my love for free and open source software, but more importantly it generates a certain trust that we will not suddenly introduce a pay wall, because at least in theory anyone could take the existing code and continue phyphox into a different free direction.

What was your favorite project, you have seen set up by school or university students using phyphox?

There are so many, it is not easy to pick one. However, the use-case that I find most entertaining, although strictly speaking not done by students, is monitoring the cabin pressure on an airplane when the lavatory is in use. We first saw an image by Youtuber Dianna Cowern (aka Physics Girl) who challenged her followers to explain a short pressure drop on a plane. Later, after we learned that it was caused by flushing the toilet, another user demonstrated that he could monitor every flush just by logging the air pressure from his passenger seat.

How do you envision implementing a similar learning experience for quantum content? Obviously, there aren’t any quantum sensors in the mobile phones that we can use, but if you wanted to find a way to illustrate quantum content to advanced students – which way would you take?

That’s a difficult question. Indeed, I do not see a way to measure anything directly using the currently available set of sensors, but you would need to measure a phenomenon that is then explained by quantum effects. I think that more options in this area open up when we implement support for the smartphone camera. Alternatively, phyphox is also able to record data from external sensors. While that might be considered cheating, phyphox can be of help to analyze and visualize the output from a simple setup that can be constructed by students themselves.