New theoretical work from the group of David DiVincenzo proposes a scheme to circumvent the necessity of active qubit stabilization and enable highly efficient hardware for future large-scale quantum processors. Congratulations to the authors!

Together with colleagues from the University of Basel and QuTech Delft, Martin Rymarz and David DiVincenzo at RWTH Aachen University and Forschungszentrum Jülich put forward a new design for a superconducting circuit that implements a passive, hardware-efficient QEC code that does not suffer from the disadvantages of conventional QEC codes. The proposed scheme circumvents the necessity of an active stabilization and embodies the desirable advantages of QEC codes in a highly hardware-efficient manner. This built-in feature thus encodes a qubit that is inherently protected against environmental noise while still controllable, making it a competitive contender for a qubit of future large-scale quantum processors. 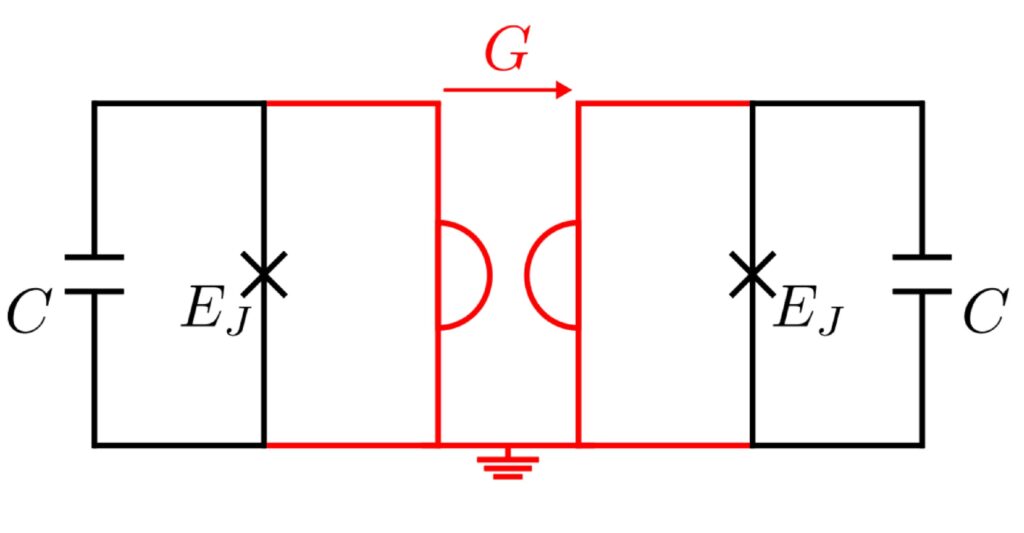 Proposed hardware implementation of the QEC code. The circuit consists of two Josephson junctions coupled by a gyrator, highlighted in red. (Source: Figure 1 of the publication)

“By implementing a gyrator – a two port device that couples current on one port to voltage on the other – in between two superconducting devices (so called Josephson junctions), we could waive the demand for active error detection and stabilization: when cooled down, the qubit is inherently protected against common types of noise,” said Martin Rymarz, a 2nd-year PhD student in the group of David DiVincenzo and first author of the paper, published February 17 in Physical Review X.

“I hope that our work will inspire efforts in the lab; I recognize that this, like many of our proposals, may be a bit ahead of its time”, said David DiVincenzo, Founding Director of the JARA-Institute for Quantum Information at RWTH Aachen University and Director of the Institute of Theoretical Nanoelectronics (PGI-2) at Forschungszentrum Jülich. “Given the professional expertise present in ML4Q’s experimental groups, we recognize the possibility to test our proposal in the lab in the foreseeable future”.

The paper was chosen to be highlighted in this Viewpoint APS Physics!