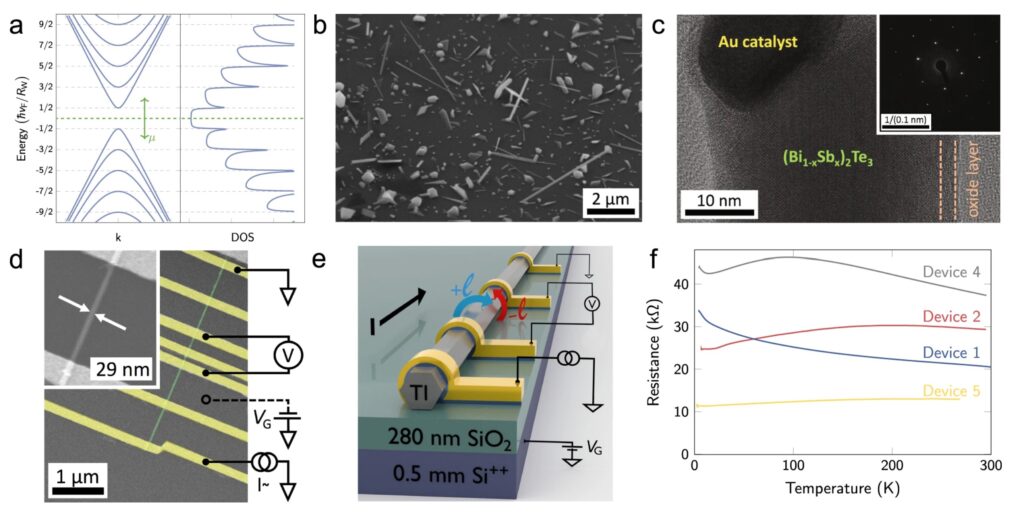 a The sub-band structure of quantum-confined TI surface states described by Eq. (1) (left) and corresponding density of states (right). b SEM image of nanowires (and other nanostructures) grown on a substrate. c TEM image revealing the single-crystalline nanowire body, the remainder of the 20 nm Au-nanoparticle growth catalyst, and a 4-nm thick oxide layer at the nanowire surface. The inset shows the SAED pattern taken in the c-axis direction. TEM image and SAED pattern were taken from different nanowires and directions. d false-color SEM micrograph of device 5 with the schematics of electrical wiring. Pt/Au leads are colored yellow, the nanowire is shown in green. The inset shows a magnified view of the nanowire. e Schematic 3D image of the device construction. Pt/Au leads are illustrated in yellow. The blue and red arrow illustrate the angular momentum ℓ. f R(T) curves of devices 1, 2, 4, and 5. (c) Felix Münning, Oliver Breunig, Henry F. Legg et al./ Nature

ML4Q researchers from the Ando lab and the group of Achim Rosch as well as cooperating partners from the Department of Physics at the University of Basel and the Institute for Physical Chemistry at the University of Cologne have published a Nature Communications paper on quantum confinement of electron wave-functions when wrapped around topological-insulator nanowires with a diameter of ~20nm.